First, this was an “on a whim” attempt since my son just fell asleep and I thought I had everything I would need, or at least substitutes that would still work.

Wow. Looks and sounds ah-mazing and I’m sure it could be.

Though I have several other things on my list of “Pinterest posts I swear I will try… one day,” I figured WHY NOT? I had a really rough day filled with a lot of crying and watching 8+ kids while at work for 4 hours so I thought that this was the “time to myself” I needed. So alas, I got off my ass and went to gather the required supplies.

I found out I don’t have parchment paper. I have wax paper. I even looked up the differences to make sure that wax paper was indeed not a logical choice just in case. I decided to keep truckin’ anyways and just use aluminum foil. I was sure it will turn out the same anyways…

I don’t have a mandolin slicer, but I have one of those slicers you find at Bed Bath & Beyond so I used that. This required me to cut up the apple since the entire apple wouldn’t fit in the slicing hole. 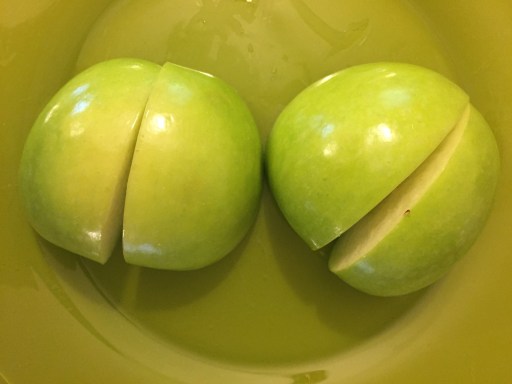 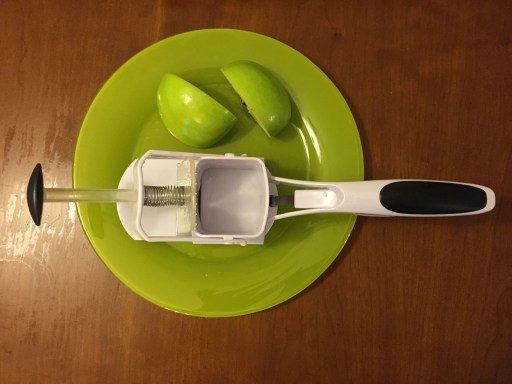 After slicing all the apples, I placed them on the foiled pan. I ended up fitting 3/4 of the apple on one pan.

Note: By this point my son, who just fell asleep, woke up crying and desperate to be held. So I continued the rest of the way with only one hand. 2/4 off the apple slices were done one-handed. By that point I started getting frustrated that my son refused to be put down. It took me so long to finish slicing and placing them that the slices were browning. 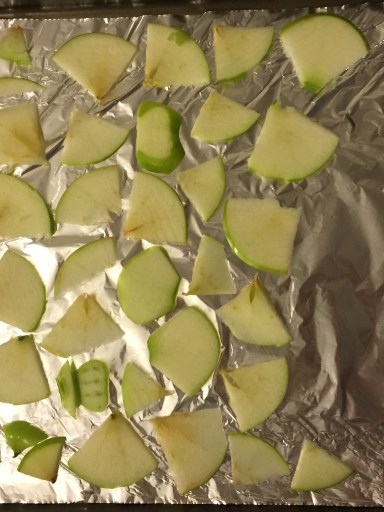 Wow. I didn’t notice how fuzzy this picture was. Moving on.

I sprinkled cinnamon sugar on them and then placed the pan in the oven at 225 degrees, as instructed. Then I opted for 45 minutes on the first side, rather than the instructed 60 minutes, since mine were sliced thinner.

AGHAST! Unsurprisingly, realizing why you don’t use foil, the skinny ones stuck to the foil and were hard to pull off in one piece. Halfway through the long and annoying process of pulling all the slices off the foil, my husband came home. He laughed at what I was doing with a judgy face, I snapped at him and sternly told him to go away, then kindly held our son so I could finish in peace. Did I mention I had a long rough day? 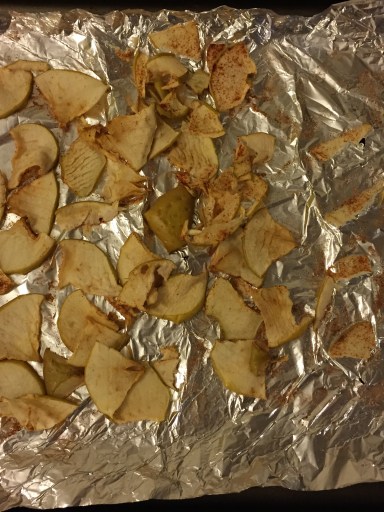 Again. Crappy picture. Here is me letting it go. Hmmmmmmm. Moving on.

I figured by this point there was no reason to even bother and waste more time on this doomed attempt of doing something fun for the day. The day just seemed destined to suck.

After flipping all the ones that were able to be separated from the foil, I put them back in the oven for only 30 minutes.

By this point I had mentally calmed down and accepted the fact that it just wasn’t going to work. I pulled my cinnamon sugar apple bites out of the oven when they were finished and put them in a bowl determined to enjoy my blood, sweat and tears regardless of how they tasted.

** WARNING ** I am fully aware (and was at the time) how crappy the next photo is. By that point I really didn’t care. I had already sat down and eaten some of them so I wasn’t about to get up for anything if I didn’t have to. 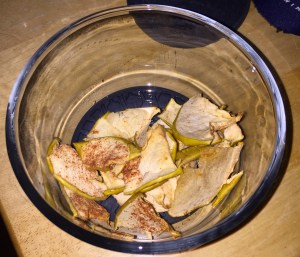 Shockingly they were not half bad! I think it was because of the cinnamon sugar. The apples still had a ton of moisture and were mostly chewy, even the skinny thin ones.

I would totally give this another go on a day that I had help with the baby and if I bought parchment paper. Until then, this is my experience giving this pin a go.

Have you tried to make these? Did you follow different directions? How did they turn out? Comment below.

How to Make “Not” Apple Chips